The weekend was long and finally over. It was a good weekend. I was at my parents house and I was with my kids but Alex was home and I was not. I love my parents and I am incredibly grateful for all their kindness and hospitality. I’m just a homebody though and like to be home. And I am super glad to be back home with my husband. And not just for help with diaper duty, though there is that.

Monday was my niece’s birthday and my sister had rented an 18 foot blow-up bouncy water slide. It was so high. I had an excuse not to participate, thank goodness, because I am so afraid of heights sometimes. My oldest five kids are not afraid and they were climbing up and sliding down for hours. I don’t know how they could walk after that. Maybe today they will be sore. It was probably the most fun birthday party I’ve ever been to. The kids played with their cousins all week and the party was a good way to end our stay.

We drove home that afternoon and got there right on schedule. Yes, I had a schedule I made and kept. We had to go pick up our fair entries and premiums. Once the kids saw that they were excited to have more entries next year. I was excited just for the ribbons. It was a fun experience.

Once all that kerfuffle died down I got down to business and assembled the IKEA furniture I had been pining after for ages. Last time I’d done the assembly I had to basically assemble everything twice or more times. I remembered that and this time I only did it once! Yay! I still have a couple more things to put together and then to the task of putting everything away. Like there isn’t enough to do. I have a bunch of errands to run on top of meal planning and grocery shopping.

Covid hit my county this past weekend. I’m wondering where it came from. I’m also wondering how it will effect the school year. The school board already pushed the start date back two weeks to implement teacher training on a new platform. I have six kids in school this year and the circus that is distance/ online learning is not something I look forward to. So much uncertainty. This year has been a tough one. I know there are tons of people who will be glad to see it go. I guess we just make the best of it all and do the best we can. There isn’t much else we can do.

This summer has been busy. And weird. I don’t need to explain that part. Everyone’s summer is weird this year.

On Sunday I took my kids to my parents’ house. It is kind of an annual tradition that they spend a week there every summer. I am sure it wears my parents out but they get to know their grandchildren better. We only live a couple hours away but we only see eachother a couple times a year. It would be nice to live closer but it is what it is. Maybe we’ll move someday.

While the kids have been having summer camp at the grandparents- swimming, doing crafts and playing with cousins- Evangeline (who is too young to go away for that long) and I have been keeping busy. The morning after the kids had gone I looked at the house and saw what a disaster it was. Such a big disaster. I’ve been chipping away at the mess for hours each day and I am almost done with the laundry. Hahaha. But the silver lining is that the vacuum lines stayed on the carpet for a couple days. That has never happened.

The day before I dropped the kids off we all gathered our projects and took them to the county fair. As I mentioned before, the house was a disaster and Gideon couldn’t find his painting. He grabbed a piece of paper and on the way drew a picture and we turned that in. It was pretty good. Alex and I have spent the last three nights going over to the fair and checking out all the entries. It is a small county fair and everyone gets a ribbon. It is so fun to see all the projects and art. This year was the second time that I had entered anything in and it was a good year. But what Alex and I are pretty proud of is our cabbages.

This year we planted a lot of cabbages. Two rows because we eat a lot of cabbage. It is so good! This year a few of our cabbages took off. They were giant. (We think the chicken poop fertilizer did the trick.) I measured the vegetables and we had three that were 28 inches around. We needed to turn in two 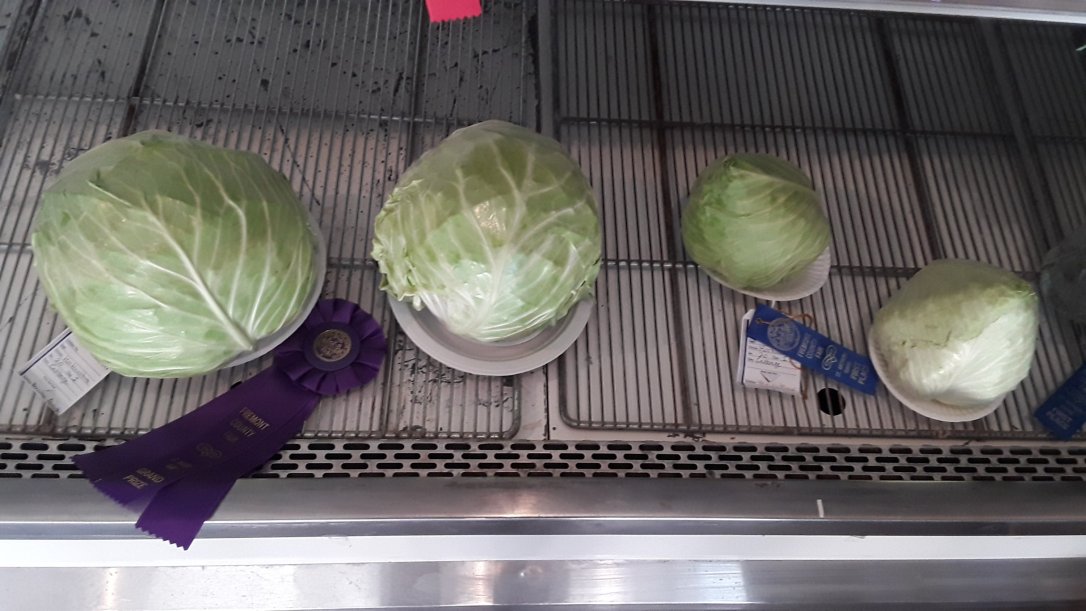 The ones on the right are your regular size cabbage. Good stuff. I just thought I’d show the comparison. A big one feeds my family for two or three meals.

I am just a bit excited because we won the grand prize!

I was really excited for the kids, too. They all won ribbons and Michael placed second in his category and Lauren got first in hers.

It has been a fun experience and I think the kids will probably put more effort and time into more projects this coming year for the next fair since there are no limits to how many entries one can do.

This morning before wrote this I realize that school is on the horizon and I am not ready! All my Arizona friends started this week online and it made me realize I need to get with it.

But I’ll leave that for another day. It is still summer here and I want to enjoy it.

The County Fair is next week. Ours is pretty small compared to some but it is still the highlight of the season. Even though we rarely enter anything into it we still like to go and see the talents and skills of those who do enter.

This year I was a little more on top of my game. Yes, we should have been working on stuff all year long for this event but at least I warned the kids a few weeks ago that if they had anything they wanted to enter that they better get it ready. Michael has some artwork that he has spent countless hours on. He touched it up and we printed it off. Oh my goodness that kid has got some talent. That and he spends countless hours on it. I used to do the same at his age. So did Alex. That is one thing that we wish we spent more time on is art.

Benjamin had some pictures that he had worked on as well so I printed one off so he can enter as well. I took a pretty cool picture the other day of one of my cats in the strawberry patch and the composition and all that was spot on. Unfortunately I took it with my inferior camera. The pixels are low and it isn’t the best quality. Had I gone for my camera I would have missed the moment. I’ll enter it anyways. No harm in trying.

I got up early this morning to make some sweet rolls to enter as well. I entered them several years ago but I have improved since then and again, why not give it a try. My great grandmother was really in to the fair. She was pretty amazing. After her funeral her kids divided up her fair ribbons. Shoe boxes full of them and a lot of them were Grand Champion and Sweepstakes at the state level. She obviously knew what she was doing. I will probably never get to that level, but I guess I have years ahead to keep trying.

Also this year our garden has been good. My family loves cabbage- even the kids. We planted lots of cabbage this year and three of them are huge. I picked the third largest one for dinner a couple nights ago and it weighed 6 pounds 9 ounces. I only used half of it for dinner and we still had a few leftovers. The others are bigger so I think I will probably enter those two into the fair and see what comes of it.

We are lucky where we are and that our community is so small. We haven’t got Covid-19 in our community and the fair is being conducted as normal. My sister’s fair is bare bones. Her kids have steers they have been raising and all the circus that goes along with steers and the fair has been cut down to just a few quick showings. It is sad how this year has cut out so much fun. We have had fun in others ways, but the normal things we look forward to have changed so drastically or disappeared that it is quite a sad thing to behold. So I am going to enjoy our small little county fair this year.

So wish us luck.